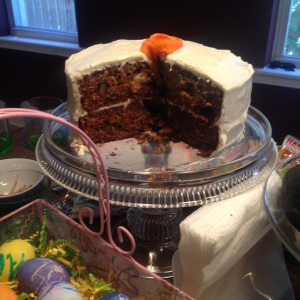 Even those of us who love parsnips and carrots suffered a little root fatigue this winter.

The carrots were a little easier to work through—so sweet for snacking (or soup or pancakes)—but the ‘snips required a bit more effort. I do love parsnips, but, right or wrong, they’re typecast for me, relegated to a supporting role in a more ambitious meal centered on a whole chicken or a braised short rib or a pork roast. And I just didn’t cook like that much this winter.

So, with one week remaining in LFFC‘s Winter CSA season, with three final bags of roots (two white, one orange) languishing in the crisper drawer—and with Easter Sunday and the one-year anniversary of Boxing Day looming—I decided to to open up the Cake Laboratory. What if I snuck some parsnips into my favorite carrot-cake recipe? Would anyone notice? Would anyone care?

My hypothesis was NO, mainly because the miracle that is cream-cheese frosting tends to distract our palate from anything it’s schmeared on. I was secretly hoping, though, that this experiment would yield something different, something that would further elevate great carrot cake’s flavor and/or texture, not just provide a means to use up surplus veggies before they go rubbery.

It was a terrific cake. Just fantastic. Spicy, moist, sweet enough but not over the top. Got top marks from all around the dinner table—including a coveted double thumbs-up from 4-year-old cake connoisseur, Jack. But with a 50-50 blend, I didn’t really notice the parsnips at all. If anybody else wants to give this a shot with 100% parsnips, I’d love to hear how it turns out.

I suspect you could do this with pretty much any carrot-cake recipe. Mine’s stitched together from Dorie Greenspan’s Baking and Gale Gand’s butter sugar flour eggs. I’ve found that, if you have the wherewithal, it’s best to make this cake by hand. An electric mixer tends to mess with the texture, making everything just a little too uniform. I prefer the sense that the bits of fruit, veg, and nuts are discretely and densely suspended in the batter rather than fully incorporated into each other.

Preheat the oven to 350º. Grease and flour two round cake pans (I used 9-inchers), and line them each with a round of parchment paper.

In a large bowl, combine the parsnips, carrots, pineapple, raisins, walnuts, and coconut. Add half a cup of the flour, and toss to coat.

In another bowl, sift together the remaining 1-1/2 cups of flour with the cinnamon, soda, and salt.

In yet another bowl, whisk the eggs and the sugar until light and fluffy. This’ll take longer than you think—maybe 3 or 4 minutes—so here it’s okay to cheat the process with an electric mixer, if you want. While still whisking/mixing, stream in the oil.

Fold the bowl of dry ingredients into the egg-sugar mixture, and then pour that into the parsnip-carrot mixture. Fold everything together.

Split the batter evenly between the two pans. Bake about an hour, until the centers are firm. Set the pans on a rack and let them cool completely before you tip them out, remove the parchment, assemble, and frost them.

Using a mixer, cream the cheese and butter until smooth. Add the confectioners’ sugar, cinnamon (if using), and lemon juice; beat until fluffy. Mix in the lemon zest.

Center the first cake round on a serving plate or cake stand. Spread a layer of frosting on top—this’ll be the “mortar” that holds the two layers together.

Frost the top, and either let it ooze down the sides or go ahead and frost the sides, too.

Thanks to my dinner companions Sunday for being such willing taste-testers. And thanks to all of you for reading Boxing Day. It’s been a fun year, and I look forward to the next.

Local guitar heroes The Parsnip Revolt may or may not be singing about my crisper’s stash of root vegetables.