This year’s “summer” CSA season is winding down—just three weeks left—and it’s been a rough one for farmers and gardeners in our neck of the woods. Stifling heat mid-summer, bookended by two of the wettest months on record (indeed, Philadelphia surpassed its annual average rainfall totals in just the first nine months of the year), spelled disaster for many of the region’s crops, from early June’s strawberries straight up through September’s late tomatoes.

Apples, though, are apparently a whole ‘nother story.

This’ll be the fourth week in a row that our fruit share has consisted of at least 18 apples. Plus, leftovers from the bulk-pickup bins accrue to the host, so our home’s counter baskets have really runneth over.

So far, we’ve been through several rounds of apple crisp (for us and for Sheila’s folks), a couple test batches of apple pancake, and six Vitamixes full of applesauce. So now, naturally, we have an over-abundance of applesauce.

Cue these supermoist baby cakes, adapted, just lightly, from smitten kitchen. If you’d prefer a full cake to cupcakes, this batch fits nicely into a buttered 8- or 9-inch square. Just know that you’ll need to roughly double the cooking time (check it after 35 minutes), and you’ll likely have some frosting left over.

Butter your cupcake tins or line them with paper liners (I use silicone molds set on a sheet pan).

With an electric mixer, beat the butter, sugar, and vanilla at medium-high speed for 3-4 minutes, until light-colored and fluffy. Slowly beat in the first egg, letting it incorporate fully, then do the same with the second. Now beat in the applesauce.

Stir in the dry ingredients by hand (or at low speed) just until they’re well combined. The resulting batter will be thick as cake batters go—certainly more scoopable than pourable.

Spoon the batter into the muffin cups. Be careful not to overfill, though—shoot for between 75 and 80% full so that you get a nice dome but no spillover. Bake for 18-25 minutes, until light golden brown. A toothpick inserted into the center of the cakes should come out clean and crumb-free.

Let cool in the pan for 10-15 minutes, then remove the cake(s) to a cooling rack to cool completely.

On high speed, beat together the cream cheese, butter, and vanilla for about 3 minutes, until fluffy. Sift in the confectioners’ sugar and cinnamon, and beat until fully incorporated. This mixture will likely be stiffer than you imagine spreadable frosting should be. Add in small amounts of the apple cider until you get the consistency you want. Frost away. 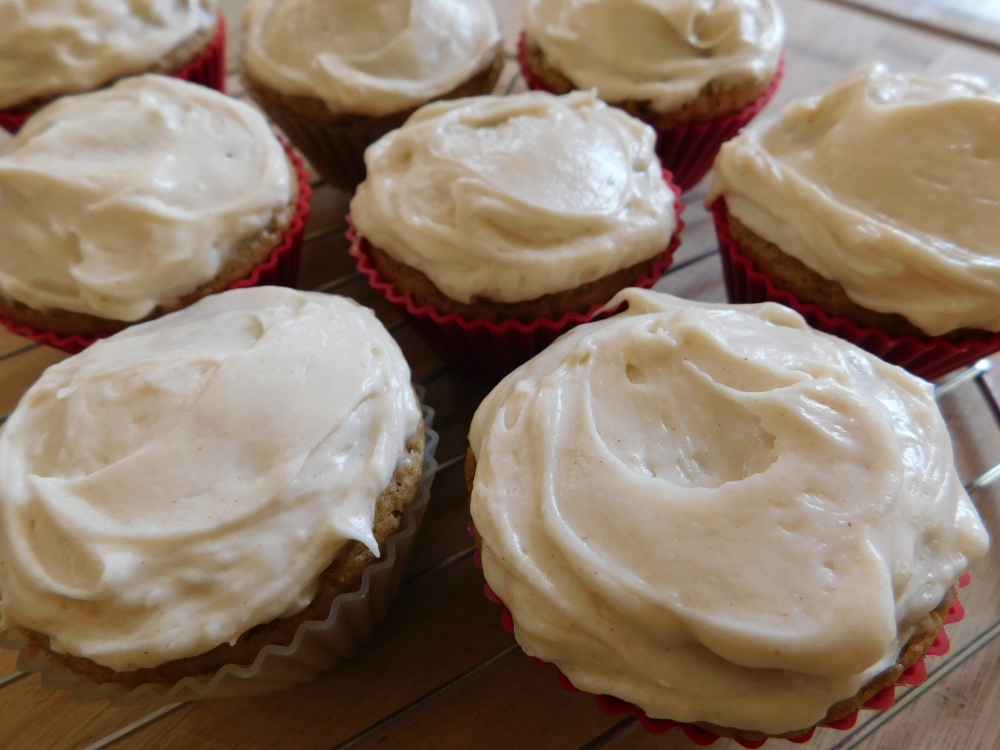 Keep any leftovers in a covered dish in the fridge. Bring them back to room temperature before serving.