Cheeky video aside, The Suffers’ Make Some Room is one of my favorite love songs ever, all about giving and sharing and doing for the folks we care most about. It was even in the running for the First Dance at our wedding last March.

But truly, I’m not trying to borrow interest from the Suffers today.

I’m trying to direct it.

Because if you’re not familiar with their red-hot, Gulf-Coast soul, you’re missing out on some of the best heart-lifting grooves being put out into our volatile atmosphere.

And if you’re not following their powerhouse frontwoman, @KamFranklin, you’re missing the heartbreak, the pulse, and the hope of Houston this past week. Her veryreal Tweets about Hurricane Harvey have brought me to tears at least three times since the storm’s landfall.

So, you don’t have to make this succotash. But I am inviting you to make a sandwich, bake a cupcake, roast a chicken, or even pick up a pizza for somebody you love today. Fire up The Suffers. Sit down and share the music and the meal. Get up and dance, if you have to. And then maybe make a donation to help the suffering humans and animals in southeast Texas. Here are two that I’ve recently supported, and there are so many more. Please do what you can.

Traditionally composed of lima beans and sweet corn, succotash has evolved to accommodate the lima-averse by cheerfully accepting fava beans or edamame instead. Limas are still my top choice, mainly because their season overlaps so perfectly with corn. Add in peppers (sweet or hot), okra, if you like. Keep it vegan by using a neutral oil as your cooking fat; butter’s my go-to, but if I’m feeling in need of extra comfort, pepper bacon, pancetta, or even guanciale rules. 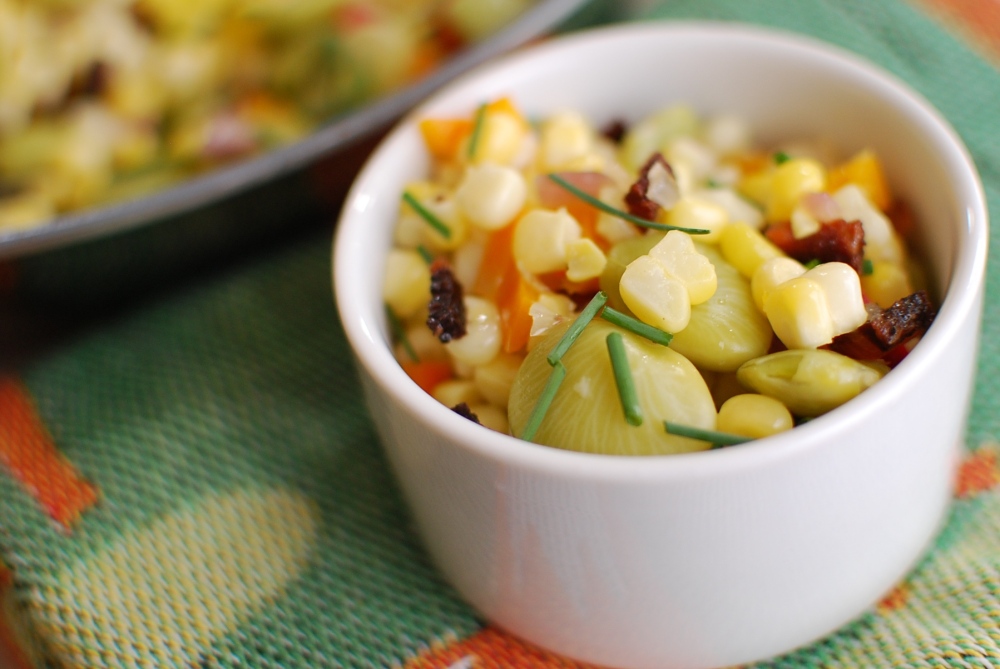 First, prep the beans. If they’re frozen, you’re good to go, straight out of the bag. If they’re dried, prepare them according to their packaging (this likely involves a long soak and several hours of simmering). If they’re fresh, put them in a pot, covered by an inch or so of water. Bring the pot to a boil, and let it go for 3-4 minutes. Turn off the heat, cover the pot, and let it sit for one hour. Rinse the beans in cool water, and you’re ready to go (I actually did this step the night before, and kept the cooked beans in a covered jar in the fridge until I was ready to assemble the dish).

Cook the guanciale/pancetta/bacon over medium-low heat until crisp. Remove the pieces to drain on paper towels, but leave the rendered and fabulous fat in the pan.

Add the onion and, stirring frequently, cook until soft. Add the garlic and cook for a minute or two before stirring in the corn, peppers, and beans.

Cook for 5-10 minutes, until the vegetables are tender.

Stir through the cider vinegar, and scatter on the chives and bacon pieces. Taste, and adjust the seasonings. Eat. Share. Be comforted.

And for real, check out The Suffers—a big band with a big sound. Many of the members  had, up until a couple years ago, “normal” day jobs (financial analyst, NASA engineer), and now they’re chasing their dreams. Support them. See them live if you can.