I’ve been picking nearly a pint a day from my Sungold cherry tomato plant for the past couple weeks.

I’ve frozen them like little marbles to pop into soups and sauces this winter. I’ve oven-dried them for hours, creating raisiny, orange bursts of sugar that take up less room in the freezer than the marbles. I’ve given boxes and boxes away. I’ve made panzanella (twice), pasta with corn, squash, and cherry tomatoes (twice), countless tomato-cucumber salads, end even an on-the-spot Vitamix soup.

So today, the plant, which was starting its swan song anyway, came out of the ground.

Before I snipped the vines into baggable pieces, I picked them clean, of course. Adding this morning’s harvest to those from the past few days, I had exactly 300 perfect tomatoes (yes, I counted as I destemmed).

I had about half as many green ones, too.

All were dispatched within an hour today.

Use this as a base for pasta sauce, or even unadulterated as a pizza sauce – it’s that sweet. It’ll keep okay in the fridge for a week or two, and for up to a year in the freezer. Note that you’ll need a whole mess of tomatoes – a quart breaks down into a scant 2 cups of purèe.

Though it’s hard to believe you could mistake that color for anything else, it’s always safest to label the container before you put it away.

This is a super-easy pickle. I like my tom-olives with a little zip, so I put in a hunk of cayenne pepper I dried last year. If you prefer them milder, leave that part out. 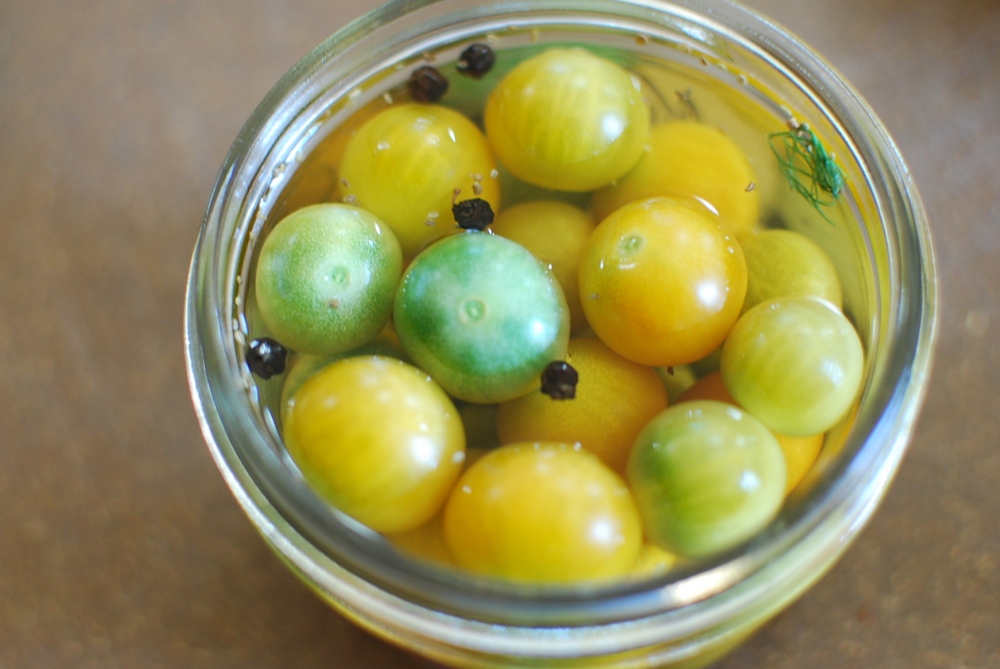 When cooled completely, check the seals and label the jars. Tomatoes will get mushy if you try to reprocess them, so store any unsealed jars in the fridge. Either way, let them cure for a least a week before you break into them.